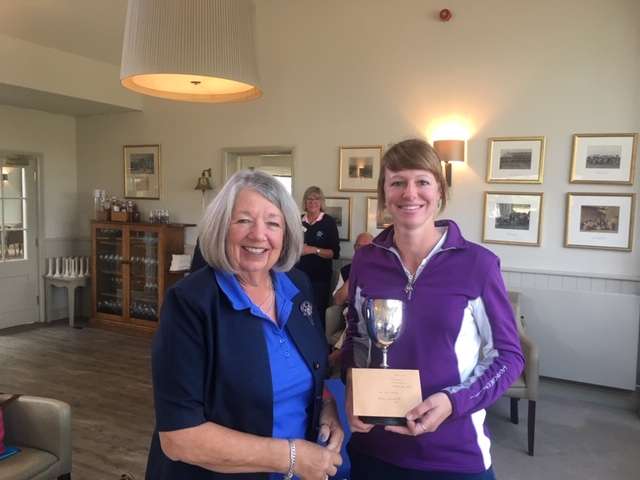 With a gross 72, two under the red tee par at Aldeburgh, Abbie Symonds (Ipswich) captured the Sybil Green Cup and the 1st net prize at the Division One meeting. She is currently in great form, having recently dropped her handicap from 2 to 1, witness her drive on sixteen which was finely judged, rolling to a stop about ten yards short of the cross bunkers. Sharon Luckman(Ipswich) has also come down from 2 to 1 and was three shots behind on 75, Amanda Norman (Felixstowe Ferry) returned 78 and Alice Barlow (Bury St Edmunds) finished on 79. She was disappointed and her result was uncharacteristic, because she is an eminently steady performer. Playing in the Champion of Champions event at Woodhall Spa on September 7th, she came fourth, and her handicap changed from scratch to +1 (or -1 as it is now called!) The Division One Shield was also captured by Ipswich, perhaps not surprisingly, since it featured Abbie, Sharon and Di Hitchcock. Liz Bezance (Bury St Edmunds) won the 1st Net Prize (86-11-75). She played the back nine immaculately up to the fifteenth which was excellent off her eleven handicap.

A glorious day dawned though the breeze was sharp when the sun went behind the odd cloud. The golf course looked amazing. It was trim, the rough cut recently, the fairways running but the field of thirty-two generally found the greens tricky to read and ‘I took three putts’ was the prevailing complaint. As I sat on the bench behind the fifteenth tee, someone asked if I’d brought something warming! Well, it was quite chilly. Some putts were made, particularly one by Liz Laflin, a long, curly affair up the second green.

A slightly unusual start sheet was issued with five pairs teeing off at the first hole, three pairs beginning at ten, one pair at eleven, two at twelve, two at fifteen, two at seventeen and one at eighteen. If it seemed strange, the brainchild of The Aldeburgh Secretary, David Whybar, the end product was a very comfortable and relaxed lunchtime with everybody arriving in the dining room at more or less the same time. In consequence prize giving was prompt, too. It seemed that everyone had enjoyed the day.