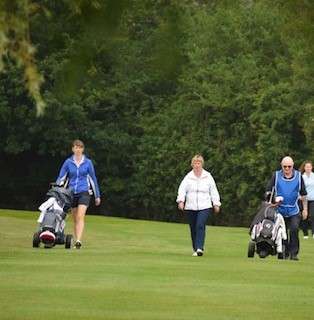 The match against Cambs & Hunts proved to be the highlight of the week so far for our team, who fought their way to a halved match overall.  Everyone is working hard but, in general, Suffolk are finding the going tough and a muscular niggle or two might be affecting the outcomes of the individual matches.

The team’s Thursday game was against Hertfordshire who already have two match wins on the board and were obviously hoping for a third success which would bring them level with Norfolk, will be delighted to have finished the day with a 6-3 scoreline.   It was not an easy victory.   As on the previous two days, Suffolk was ahead at lunchtime with two foursomes points on the board.

Lottie Whyman and Sharon Luckman had a fine win in the morning despite a slight dispute over the rules but Lottie wasn’t quite on her game after lunch.  Her opponent was also the recipient of a barrage of serendipity and she made the most of her good fortune.

Georgia Parker, who has made the step up to the ladies’ level from the Junior golfing scene, is doing well.   She has a pragmatic approach to the matches and, win or lose, she is not fazed by the occasion.   Today she lost on the eighteenth.

Lils James also lost on the last hole and the only success from the six singles matches came from Abbie Symonds. Over her county golfing career, Abbie’s efforts in a good cause have been outstanding and it is good to see her maintaining her battling qualities.

Suffolk’s foursomes play over the four days has been very productive but, unfortunately, their usual ability to turn the singles around has deserted them. Of course, Norfolk will be hoping to keep their momentum going with a win over Essex, taking their match tally to four and keeping their noses in front in the race for the Championship Finals place.