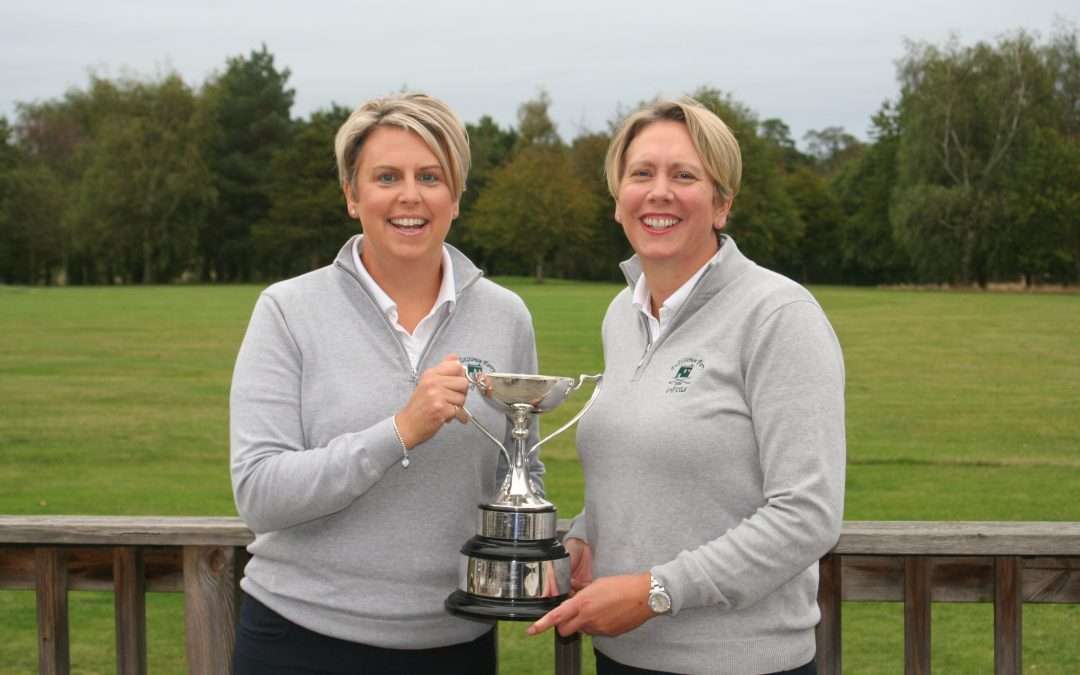 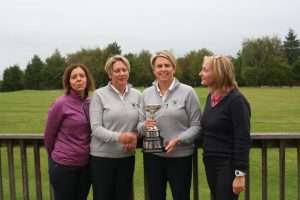 Amanda Norman and Jo Woodward, playing the sort of golf we are used to, found Rookery Park’s Hannah Rees and Carole Bostock in fine form, too. This was a reprise of the 2018 final and the Felixstowe Ferry pair finally managed to clinch victory on the last green of the thirty-six-hole match, the winning margin just one hole.
The Hintlesham golf course had withstood the torrential rain of the previous day pretty well, the only sign of the deluge the GUR labels on a few bunkers and greens that were rather slower than might normally be expected. Over the day, birdies were scattered like confetti, five for the Norman/Woodward partnership and six for Rees/Bostock and the gross scores were quite remarkable. Against the par of 72, Felixstowe were round in 74 in the morning and Rookery Park in 76. Both completed the afternoon eighteen holes in 73.
Perhaps the standout shot of the day came at the par 4, 364-yard eleventh, second time round. From amongst the trees, Amanda boosted a five iron which finished on the fringe of the green. The team made par while Rookery dropped a shot. Having won the previous three holes, Felixstowe lost the eighteenth before lunch to another birdie from Rookery but they were still sitting on a two-hole cushion to start the second round. 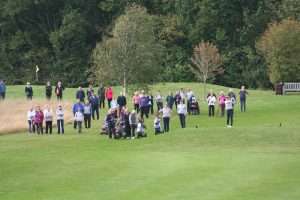 Rookery Park won the first hole before Felixstowe got back to winning ways, taking the next two which included a birdie, halving the short fourth and winning the fifth for four up. Two more holes went Rookery’s way but the ninth (411 yards) was halved in birdie. Felixstowe back to 2 up. Good scoring all round was noticeable on the next six holes but Rookery made yet another birdie on seventeen reducing their deficit to one hole.
The final hole on the golf course is a par 5 415 yards long, involving water. Here both teams stepped up to the plate. Rookery hit their approach to four feet, leaving themselves a putt for birdie. Felixstowe, however, also had a birdie putt which they made for the half, the match and the beautiful Haskell trophy by the most slender margin possible The game could not have been closer and the happy band of supporters were fortunate to enjoy a good spectacle. The foursomes game is alive and well! 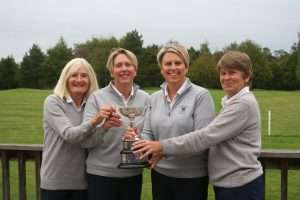 Jo and Amanda with their caddies Pam Evans & Jude Hanner

With thanks to Di Hegarty, the Caddies and the Pro at Rookery Park.