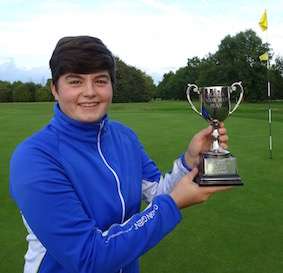 Although Alice ran out the winner on the thirteenth, Georgia had put up a good fight.   Outgunned by her opponent, she halved several holes with the much more experienced Alice and was still smiling at the end.

Alice leaves the Junior ranks this year and we look forward to seeing more of her as she joins the ladies. As for Georgia, she also has had a very productive year around the county and has considerably reduced her handicap since the beginning of 2016.  We hope she will go on from strength to strength.   By the way, she escaped before we could get a photograph of her!

Thanks to Sarah Howe for the information.