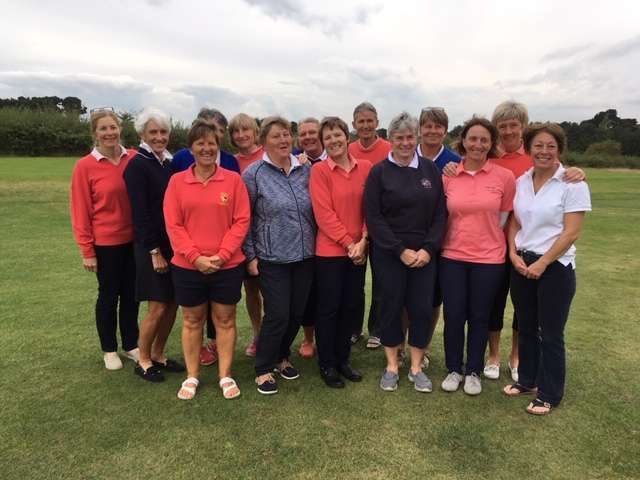 The Seniors personnel played each other at Aldeburgh.  Suffolk in blue, Norfolk in coral

Playing on home turf at Aldeburgh, Suffolk Seniors lost out to their Norfolk counterparts by one point (4-3).  The course was still in fine condition after the Jacques Leglise event held a couple of weeks earlier and the visitors were very appreciative. In line with Aldeburgh regulations, the seven-a-side teams played singles rather than their usual 4-ball better ball format.

Two of the matches, those between four of the most experienced players, Vicki Hunt (Suffolk) and Karen Young and Sandra Ball versus Sue Meadows, were halved, whilst Norfolk captured three of the other five points available.

The skillful Tracey Williamson enjoyed a hot putter to beat Suffolk’s Helen Bray (5/3).  Norfolk’s Captain, Nicky Wylie saw off Deborah Pottinger, a single-figure golfer from Bunty by 3/2.   Suffolk’s Nickie McMahon, has happily returned to golf as her family is growing up and taking an interest in the game themselves. She beat Sharon Allen (3/2). Jude Hanner was not at her imperious best, cheerfully revealing her loss to Sharon Black on thirteen but Louise Morse, enjoying a close and steady game  against Sally Benton, reached 2up and remained in front most of the way round, finally running out the winner on seventeen (2/1).

Though it was blowy autumnal day, the rain conveniently stayed away till the friendly and enjoyable activities were complete.