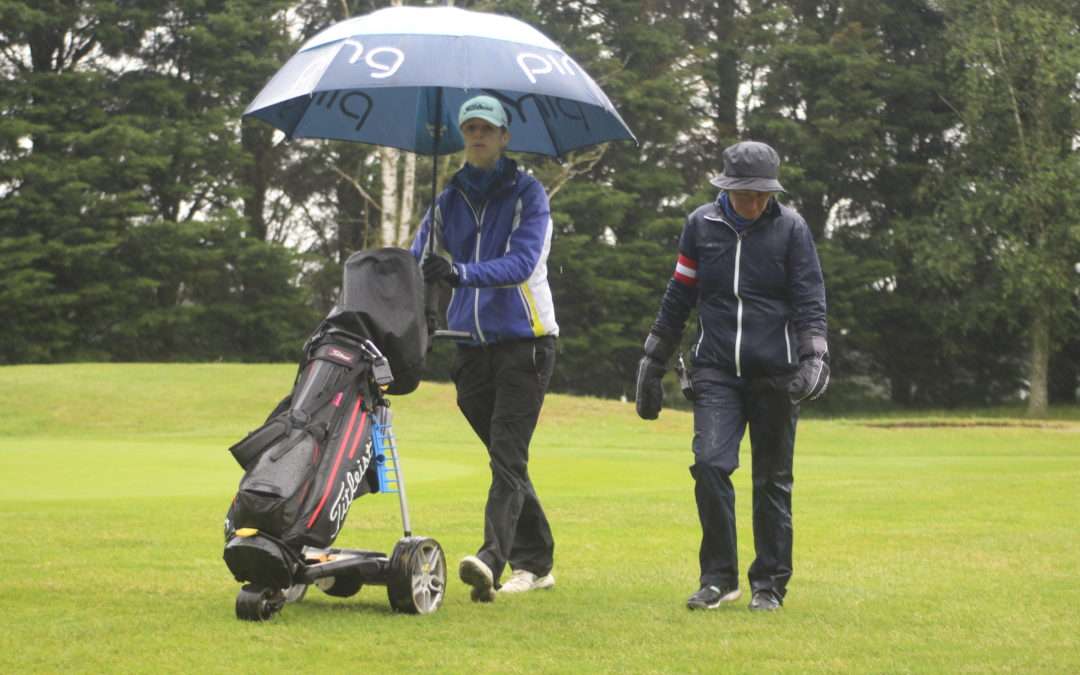 Stoke-By-Nayland golf course was practically under water by tea time when the second round of matches had completed about nine holes. Everyone will know that Friday dawned grey and threatening and, as play got under way the threat had become a reality.  Stair-rod conditions created problems for everyone and as caddies were not allowed, the difficulties proliferated.

Disregarding the conditions, however, Suffolk had a very splendid result against Hertfordshire, a 3-2 victory putting some useful points on the board in the context of the three-day event.   In detail, Lils James and Sophie Kubitzek won 2 up, giving Sophie a positive and encouraging start to her county golfing career.   Champion Alice Barlow romped round to finish at 6/4 against Mawgan Vater and Abbie Symonds played her usual determined golf to beat Honor Keilty 2 up at the last.   She played the crucial 136-yard eighteenth in delightful fashion with a pin splitting four iron to about twelve feet.  The ball eased to the hole side, producing a par three which Honor couldn’t match and increasing her deficit to two.  Who knows how important that might be come Sunday lunchtime.   The other two points went to Hertfordshire.

After lunch, the new format of two foursomes and three singles over eighteen holes produced Bedfordshire as Suffolk’s opponents.   It was raining again and preferred lies were allowed on the fairways.  Balls were to be taken out of bunkers if water was a problem, dropped according to the rules and one penalty shot incurred.

There was one change of personnel in the Suffolk team, Georgia Parker coming in for Sophie to play with Lils James against Laura Colin and Sue Caley.   This was a tough game, closely fought.  Holes were swapped in turn until Suffolk reached the ninth tee at one down.  Here Lils hit the green 139 yards away.  Beds approached first so close it was given and Lils’ putt stayed out.  So Suffolk were two down when the heavens opened once more and the rain came down in torrents.

Vanessa and Sharon, up ahead, were keeping things tight.  Alice, once again, was streaking ahead, four up after nine against Annabel Pitts.   Abbie was 2 up against Georgia Staroscik after nine, thanks to a delightful shot from a bunker, the putt conceded.   And that was where everything came to a shuddering halt.

Some heard a klaxon, many did not but eventually everyone reached the clubhouse in safety and, after much deliberation, it was decided to suspend activity until tomorrow morning when, presumably these matches will finish before the next round begins.   It will make for a very long day if the schedule is completed.   On the other hand, there is only one match for each county on Sunday so maybe tomorrow’s play can spill over if necessary.  No doubt all will become clear tomorrow when we will all hope for a better day.